On a consolidated level, CarTrade reported revenue of over INR 318 Cr, which resulted in a net profit of INR 31.2 Cr, outshining its rivals in the market

With the public offering, CarTrade is making a pure offer for sale (OFS) for 1,23,54,811 equity shares of the company

Automobiles marketplace CarTrade has released the draft red herring prospectus for its initial public offering (IPO) and as expected it has thrown up some interesting insights about the automobile ecommerce market in India. CarTrade stands out among India’s automobile marketplaces based on FY20 financials, and is the only platform that has shown profitability.

With the public offering, CarTrade is making a pure offer for sale (OFS) for 1,23,54,811 equity shares of the company. It is said to be looking to raise INR 2K Cr through its IPO. A number of details about the company and the segment have been revealed in the CarTrade DRHP. Among the key competitors, CarTrade has compared its financial performance to unicorns Cars24 and CarDekho (owned and operated by Girnar Software Pvt Ltd), as well as Mahindra First Choice and Sandeep Aggarwal-founded Droom. Mahindra First Choice is the only other competitor to have a positive EBITDA, but only just barely at INR 50 Lakh.

How CarTrade Made A Profit

“We operate on an asset-light business model, operating only 114 auto-malls, a large majority of which we lease or rent from third parties. We have invested significantly in building technology platforms that can manage considerably increased offerings without requiring sizable additional investments, and our growing scale has resulted in a decrease of the share of fixed costs,” the company’s prospectus said.

The company believes that its investments in technology have made its various platforms and services scalable without high capital expenditure. The company added that the asset-light business model has allowed it to use cash on the balance sheet for acquisitions, which is one of its key strategies.

One of the major areas of cost-cutting has been advertisement, marketing and sales promotion expenses, which amounted to INR 7.7 Cr from March 2020 to December 2020, which came up to 4.11% of the total income in the period. In comparison, in FY2020, CarTrade spent INR 24 Cr (7.56% of its total income). The focus on bringing in customers without spending on marketing resulted in SEO streamlining and targeting search keywords through content marketing on Carwale and Bikewale. This resulted in 88.44% of unique visitors coming organically to CarTrade sites in the financial year 2021, the company said. 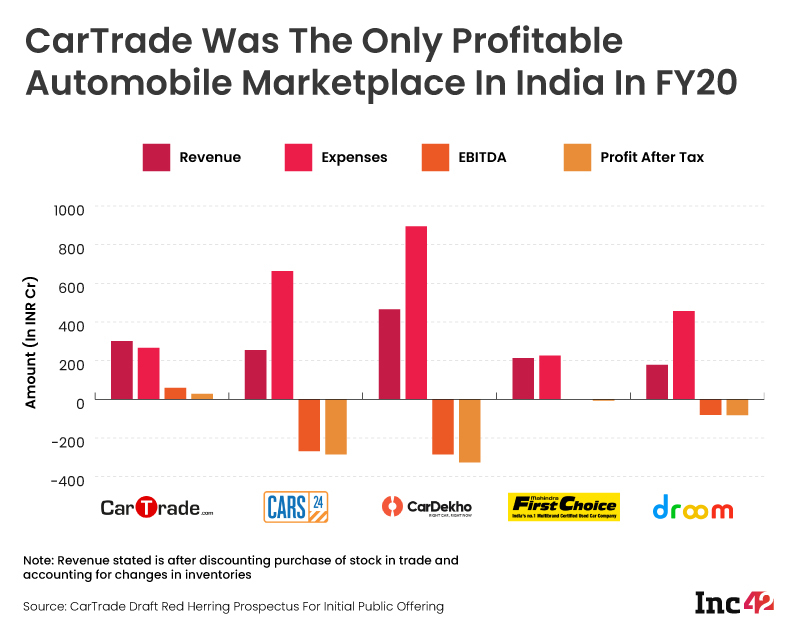 Among the competition that CarTrade has considered, CarDekho is the rival with the highest income, as per its own filings, though it did not turn a profit in FY20.

Gurugram-based unicorn Cars24 doubled its revenue in the financial year 2020. It recorded consolidated revenue of INR 3,056 Cr in FY2020, compared to INR 1,687 Cr recorded in the previous year. About 98% of the company’s revenue has come from sale of products, which nearly doubled from INR 1,650 Cr to INR 2,966 Cr in the year. The company’s revenue through sales of services grew by over 5x from INR 4 Cr to INR 22 Cr in FY2020. Besides this, the company also added two more revenue sources in FY2020, namely income from interest and other financial services.

CarTrade says its technology platform will not only be a bulwark against rivals, but continue to contribute to profitability by reducing the cost of operations. The company said it has built a large dataset of vehicles through user activity on CarWale and CarTrade Exchange. Its websites and apps handled approximately 2.05 Mn user sessions per day in the quarter ended December 31, 2020, it claimed.

“We analyze vehicle sales that happen through our auctions, as well as vehicles offered for sale by dealers on CarWale, CarTrade and BikeWale using data science and proprietary algorithms based on a number of factors, including vehicle-specific information on automotive transactions, vehicle registration records, consumer buying patterns and behaviour, demographic information, and macroeconomic data,” the DHRP filing read.

Besides the competitors mentioned by the company, the Indian automobile marketplace segment also has the presence of the likes of Spinny. The Gurugram-based online used cars marketplace raised $65 Mn in a Series C funding round last month led by Silicon Valley-based venture capital firm General Catalyst. Spinny said it intends to use this funding to expand into new markers, strengthen technology, product capabilities, launch new business categories and build teams across functions. With rising growth of the automobile market, India’s pre-owned (used) car market has also evolved over the years. Pre-owned car market grew steadily in 2020, touching 4.4 Mn units. India’s used-car market is estimated to reach between 6.7 Mn to 7.2 Mn units in sales per year by 2022, with the value of the segment pegged at INR 50,000 Cr.