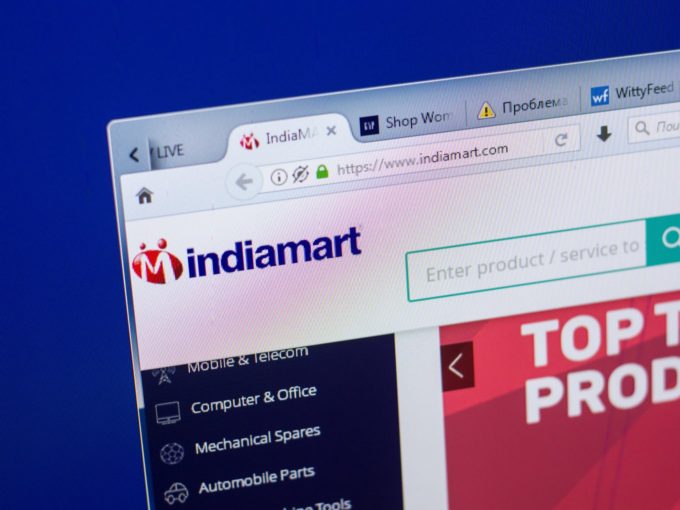 Publicly-listed online B2B marketplace IndiaMART has ended the fiscal year 2020-21 (FY21) with a revenue of INR 190 Cr in the fourth quarter (Q4) ended last month. The company’s financial performance in Q4 FY21 is just marginally higher than the revenue of INR 187 Cr it recorded in Q4 FY20. However, IndiaMART has recorded total revenue of INR 756 Cr in FY21, a 7% year-on-year (YoY) increase from the INR 707 Cr it earned in FY20.

The company has claimed that the traffic on its website also grew by 42% YoY to 257 Mn visitors in Q4 2021. Total business enquiries delivered increased to 150 Mn from 116 Mn, a growth of 29%. Supplier storefronts also grew 9% YoY to 6.5 Mn last quarter.

“We are happy to close the financial year with modest growth in revenue and deferred revenue with healthy margins and cash flows. A strong response from global and domestic investors leading to the successful closure of QIP offering in this volatile market environment further demonstrated their confidence in the business model,” said Dinesh Agarwal, CEO at IndiaMART.

Incorporated in 1999 by Brijesh Agrawal and Dinesh Chandra Agarwal, Noida-based B2B marketplace IndiaMART went public in June 2019 and gave startup founders some new goals in the process. Since then the company has seen steady growth across markets and segments.

Previously, Agarwal has explained that IndiaMART’s large geographical reach and product assortment helped the company record 10 Cr buyers on its platform, a mark it breached in the last quarter of FY20. The IndiaMART CEO has claimed IndiaMART to be the first B2B marketplace to reach this mark. With 6.6 Cr products listed in over 1 lakh categories ranging from groceries to electronics, this allows the company to attract large numbers of buyers and sellers.  Besides this, the platform also has close to 60 lakh sellers listed on the platform.

Closing the fiscal year with a modest revenue growth would come as a relief for IndiaMART, considering that the company had last year prepared for the worst amid the pandemic. Agarwal had told Inc42 in May that each month of the Covid-19 induced lockdown could see IndiaMART’s 147K-strong customer base shrink by 10-20%. The company’s paying subscription suppliers did reduce to 133K in the first quarter.

A worry would be the resurgence of Covid in India, which has meant that several states in India have slipped back into the mode of lockdowns and curfews this month. This has impacted B2B marketplaces once again as many of the products they supply are not counted in the essentials category.