In June 2020, the company raised $2.75 Mn in seed funding led by Nexus Partners and Sequoia Surge

The company has started the onboarding process for the US and Canada-based companies and plans to launch in other markets, including India and the EU

More than a year into the Covid-19 pandemic that has led to several surges and multiple lockdowns across the globe, remote work is flourishing as the backbone of the new normal and per-company spending on SaaS products has gone up by 50% compared to 2018. The need for SaaS tools is now paramount, given the digital-first, technology-driven approach most companies are compelled to adopt in the current scenario.

However, choosing SaaS unwisely such as two different teams independently purchasing the same app or forgotting cancellations of apps that were bought for a short period may lead to an unnecessary cost addition bringing down the very efficiency it was supposed to boost.

According to a 2020 SaaS trends report, an average company wastes around $135,000 a year on SaaS tools that they do not require or use. The report also suggests that some SaaS waste stems from companies paying for multiple tools that solve the same problem. Similarly, forgetting to cancel SaaS subscriptions of former employees leads to auto-renewals and payments for unused licences, thus pushing the costs.

In brief, companies need to strike a balance between their SaaS usage and budgetary allocations for maximum benefit. According to Indus Khaitan, a Silicon Valley-based serial entrepreneur, it is essential to draw a fine line to shut out the noise and focus on creation. 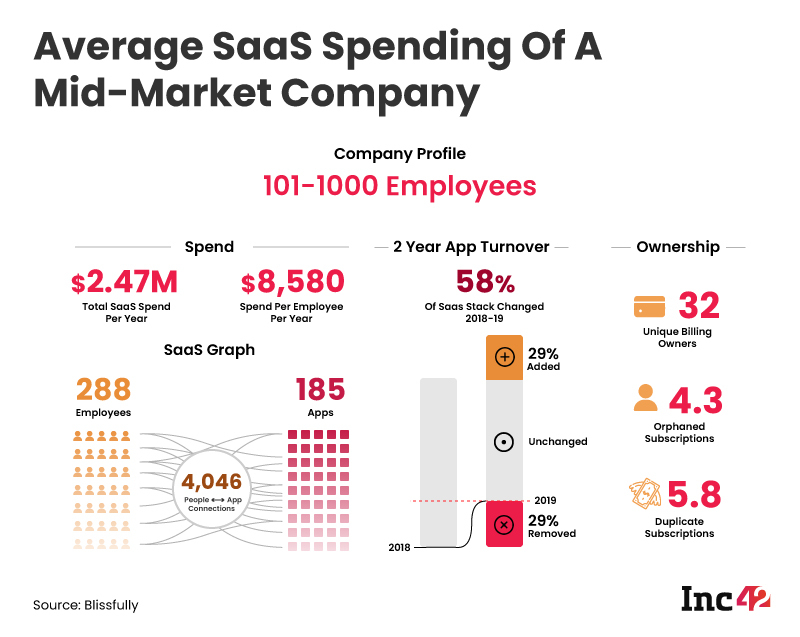 Khaitan wore many hats: He was an investor, an advisor to Sequoia Capital, US and the chief of growth at Chargebee, a Chennai- and Silicon Valley-based startup that helps SaaS companies and ecommerce businesses with setting up, managing and automating subscriptions, billing, invoicing and payments. He was also director, product management, at Oracle. But most importantly, Khaitan’s startup Quolum is now specialising in a spend management system that enables companies to monitor their SaaS expenditure and thus have greater control over technology costs.

Speaking to Inc42, Khaitan says, “If you look at the traditional expense management tools, they are designed for managing what the industry calls travel and entertainment. If you see the consumption of SaaS and cloud and the way it has been increasing, you will understand why we need a special-purpose expense card for bringing these costs together. Hence, we married the SaaS payment and a software stack behind the scenes to manage SaaS. That was the idea behind coming up with a unique combination of SaaS payment and SaaS management as a single SaaS Card.”

Set up by Khaitan in 2019, Quolum has recently come up with a virtual SaaS Card to solve the companies’ SaaS spending dilemma. In June 2020, the company raised $2.75 Mn in seed funding led by Nexus Venture Partners and Sequoia Surge, a rapid scale-up program for startups in India and Southeast Asia. As many as 12 angel investors reportedly took part in the round.

What Is Quolum’s SaaS Card?

Drawing an analogy between electricity and SaaS consumption and their respective bills, Khaitan argues, “When you get an electricity bill, it is not just the dollars that you owe to the service provider. The cost is broken down under various line items, from power generation, transmission, distribution to franchise fees paid to local municipalities, recovery charges for subsidised electricity programmes and more. For software to be embraced and adopted like electricity, its value needs to be clear to buyers. If the value cannot be assessed, you need to know the cost calculation better.”

He believes that in the SaaS industry, there is a major issue — buyers and sellers do not appear to see value in the same way. Although global SaaS spending crossed $100 Bn in 2019, there is a fault line in the value perception. To address the SaaS sprawl, Quolum has recently launched (the company was in stealth mode for two years) a virtual corporate card called the Quolum SaaS Card for all SaaS purchases. The card will also help track SaaS consumption and manage renewals.

“When you buy a subscription to Zoom or your go-to SaaS application, you also get to see whether you are consuming these products or some licences are sitting as shelfware. So, we have taken the unique step of bundling SaaS payments with SaaS management,” explains Khaitan.

Simply put, the Quolum SaaS Card will identify the effectiveness of each SaaS application used by company employees and will further suggest whether one should continue with the subscription. One can also choose to set a specific spending limit beyond which the card will not allow employees to spend on SaaS applications.

How The Quolum SaaS Card Works

The Quolum SaaS Card is a password-free application. One has to use his/her corporate ID (G Suite Octa or Azure) to sign up for Quolum. The onboarding process is simple too.

According to Jay Magdani, the company’s product head, “Using our rule engine, you can add spending limits, application blacklists and other custom rules for each individual/department. Given that we are VISA-powered, that partnership helps us identify if a merchant is a SaaS vendor. We will auto-reject all transactions that do not originate from whitelisted SaaS vendors.”

Although the business card has been launched for B2B purposes, Khaitan says that an indie hacker or a prosumer who owns a design studio similar to a one-person company can still opt for this SaaS Card. The only restriction is that it is not meant for consumer (B2C) purposes.

Speaking about the revenue model, Khaitan says, “Quolum SaaS Card is a freemium product. Currently, it has been launched as a free product with limited features. But in a couple of months, we will have $X per employee per month pricing model just like any other SaaS product.”

The company is trying to cater to companies with annual revenue of $100 Mn -150 Mn for the paid plans. For new startups with $8 Mn -10 Mn ARR (Average rate of return), the company is likely to keep it freemium.

Incidentally, Quolum is not one of its kind in the enterprise SaaS space. There are numerous applications such as Blissfully and Intello who provide similar services. Responding to this, Khaitan told Techcrunch, “Our differentiator is being end-to-end. We are not just looking at the dollars or stopping at how many times you’ve logged in, but we’re going deep into consumption. So, for every dollar that you’ve spent, how many units of that software you have consumed.”

The company has currently launched the SaaS Card for companies registered in the US and Canada. It plans to enter the European market by September 2021 and will explore the Indian market thereafter. “By year-end,” as Khaitan puts it.

Quizzed on India plans, he says, “I have not studied the India market that deeply. But to issue cards to employees in India, we will require approvals from relevant regulatory bodies as our cards deal with monetary transactions.”

The company is also exploring partnership options to have easier market access in India.

“We are open for businesses that are registered in US/Canada. We are also looking for a few partners in LATAM, EU, Asia and other regions to cater to businesses registered in those regions. We will continue to expand our presence in these geographies over the coming months. And we will launch soon in India,” says product head Magdani.