Compared to the previous edition of the IPL, the number of advertisement categories have gone up by 5% to 58

Tech startups have a more language agnostic approach to advertising compared to traditional advertisers, as per TAM data The 2021 edition of the Indian Premier League (IPL) has witnessed a growth in the volume of category of advertisements, even though the overall number of advertisers has declined compared to IPL 2020, according to data analysed by TAM Media Research.

The report, which has been reviewed by Inc42, shows that among the top categories of ads during the first week of IPL 2021 included gaming, smart phones, aerated beverages and edtech platforms. Gaming and edtech platforms comprised more than 15% share of the ad volumes, the data shows. 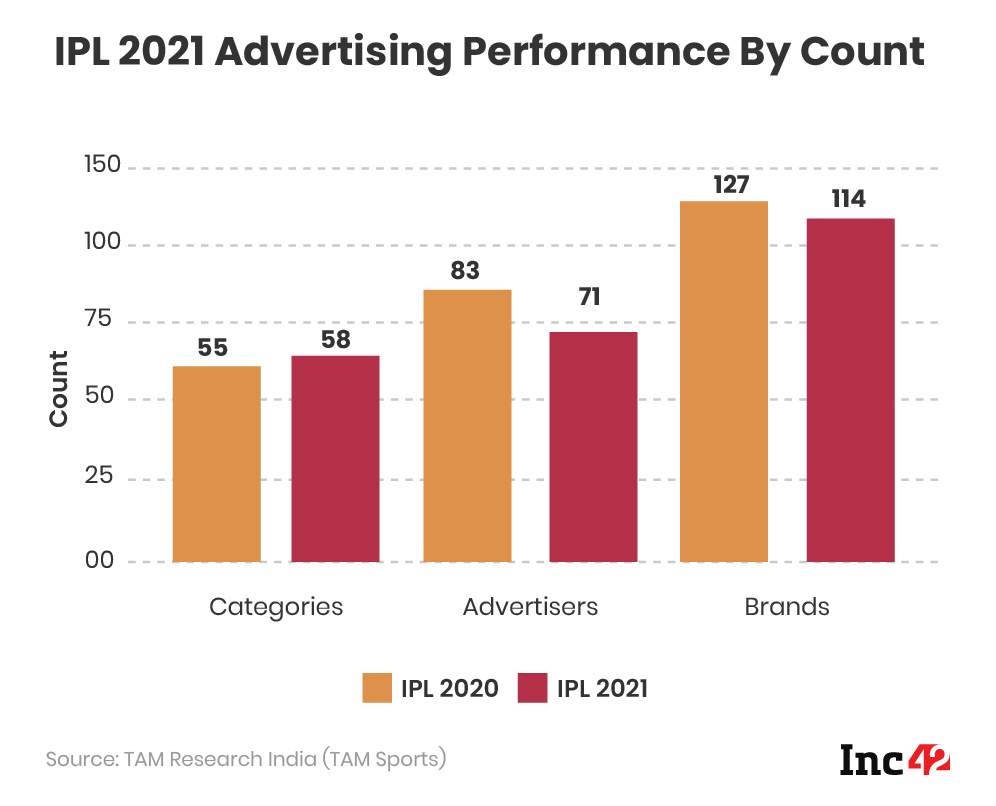 The 18 sponsors onboard for the IPL 2021 edition include tech startups Dream11, BYJU’S, PhonePe, Justdial, Upstox, Groww, CRED, besides other traditional brands. Interestingly, these startups have a more language agnostic approach to advertising compared to traditional advertisers as they have advertised equally across regional language sports channels as well as mainstream English and Hindi sports channels. 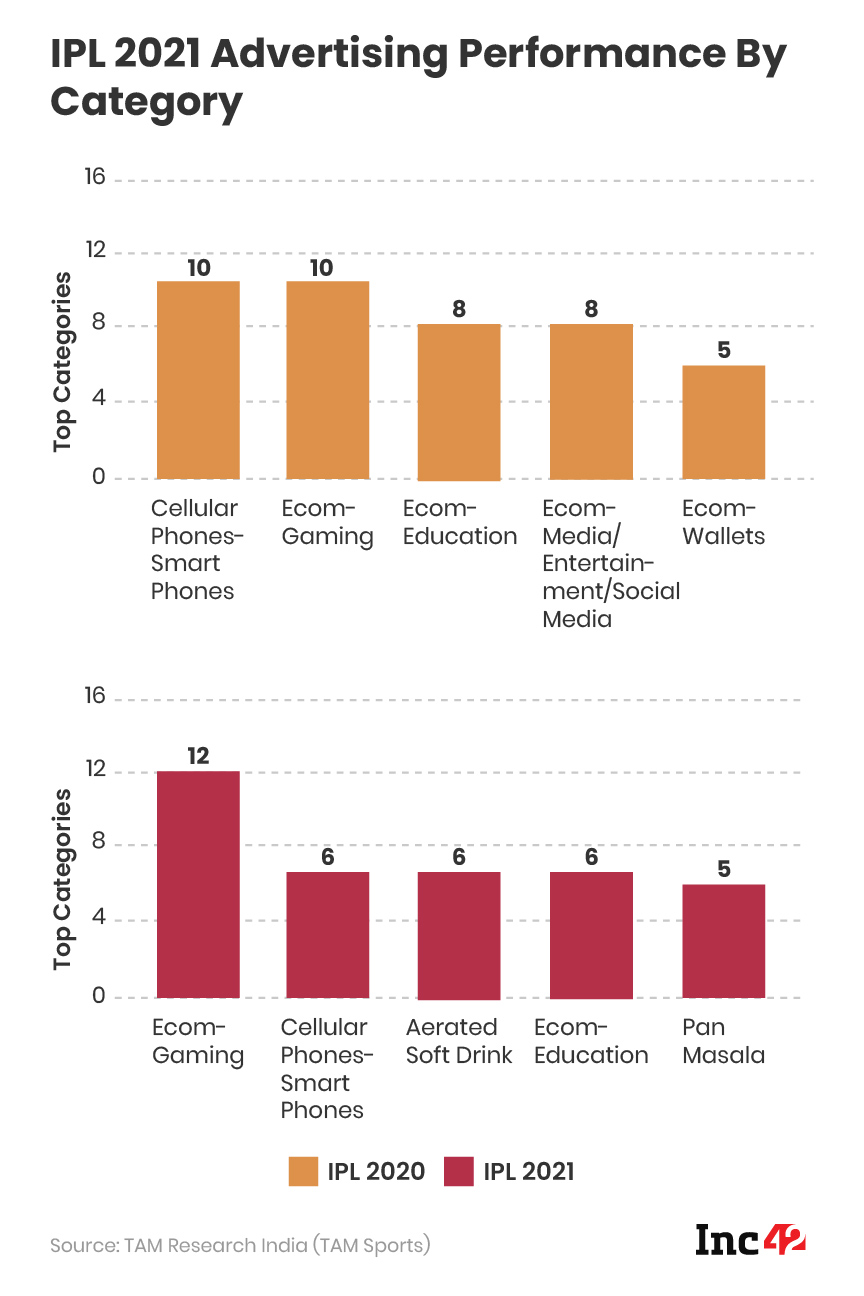 Top advertisers across Hindi and English sports channels included Rebel Foods’ cloud kitchen brand Behrouz Biryani, besides traditional advertisers such as Pepsi and Skoda. However, when it comes to language-agnostic brands, the top advertisers were Dream11, Upstox, JustDial and PhonePe out of 84 such advertisers.

This IPL season has also been a winner for fintech platforms, with many making a winning customer pitch. CoinSwitch Kuber, which is an associate sponsor for web broadcaster Disney+ Hotstar, saw 3.5x growth in user signups across all channels after the first few matches. 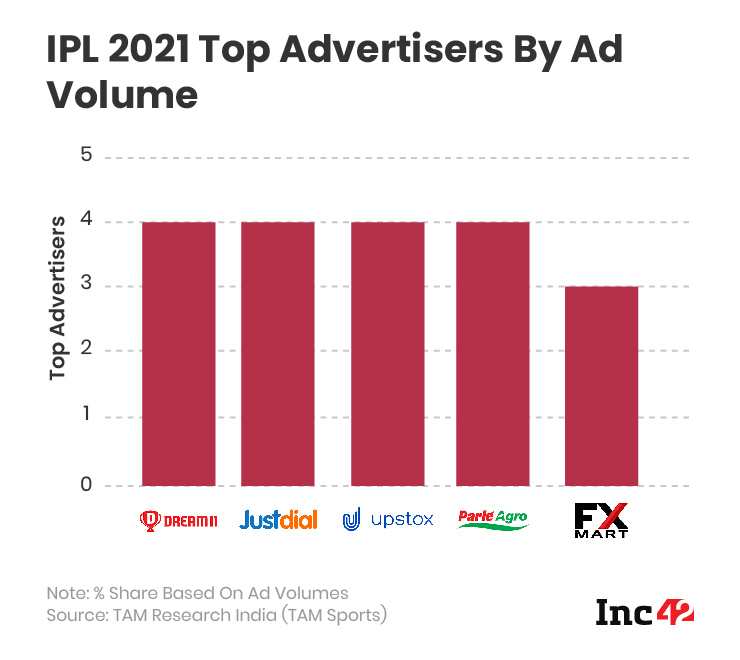 The year 2020, was exceptionally good for edtech which made the most of the extended movement restrictions across the country last year. Of the total $11.5 Mn invested in the startup ecosystem last year, 18.2% of the capital went into fintech firms that raised about $2.1 Bn across 131 deals and 12.3% went into edtech that raised $1.43 Bn across 101 deals. While fintech has always been a hero of the startup ecosystem, it was the first time edtech was among the top five choices for investors.

Similarly, with people staying at home during the pandemic, fantasy sports gaming also reached peak popularity. The segment generated a total revenue of more than INR 2,470 Cr in the financial year ended March 2020, as per KPMG estimates. The consulting firm also stated that around 100 Mn active gamers came on board the fantasy gaming platforms in 2020 (most of them played on mobile), a sharp spike from around 2 Mn active users in 2016.

Even the new advertisers such as CoinSwitch Kuber have raised funds in recent months to fuel this marketing effort. The Bengaluru-based cryptocurrency exchange closed a $15 Mn Series A funding round in January this year, led by global fintech-focused investor Ribbit Capital and San Francisco-based crypto-focused investment firm Paradigm. The round also saw participation from the company’s existing investor Sequoia Capital India and prominent angel investor, CRED founder Kunal Shah.

According to Inc42’s recent report on the Indian gaming market, between 2014 and H1 2020, fantasy gaming startups raised $180 Mn in funding, making 59% of the total funding secured by gaming startups.This also means roughly 14% of the 700 Mn smartphone users in India currently engage with fantasy gamings apps like Dream11, Mobile Premier League, HalaPlay, Paytm First Games and others.