As per recent filings, Paytm founder and CEO Vijay Shekhar Sharma’s salary is on par with the highest known compensations for startup founders

In FY2019, Sharma already had one of the highest compensations in the Indian market at INR 3 Cr, along with allowances and other bonuses

Dream11 founder CEO Harsh Jain’s salary was recently revised to INR 4 Cr, while others such as InCred’s Bhupinder Singh also figure among the top-paid CEOs 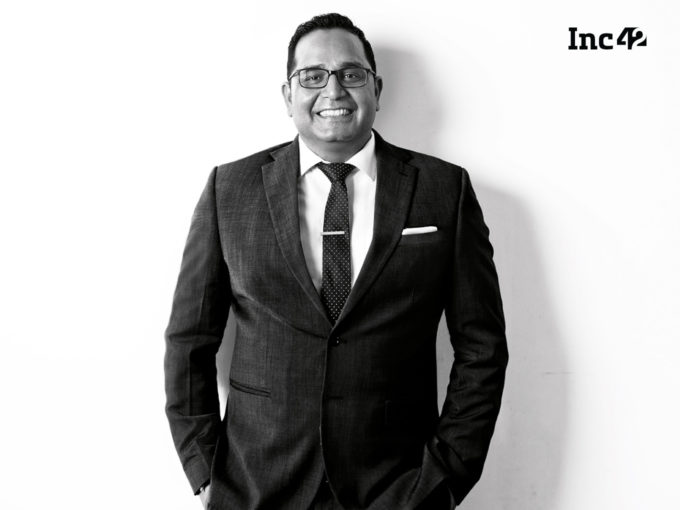 In FY2019, Sharma already had one of the highest compensations in the Indian market at INR 3 Cr, along with allowances and other bonuses

There is no shortage of headlines about CEOs and top executives of Indian startups taking home big fat checks. From motivating and pushing employees, leading fundraising efforts to guiding from the front for other employees, the CEO does it all. Despite the negative effects of Covid-19 on many businesses which forced them to shut shop, there remained a few who were able to benefit from it. One such company is India’s digital payment giant Paytm. The company’s board approved Paytm founder Vijay Shekhar Sharma’s compensation at a board meeting last month.

According to an MCA filing accessed by Inc42, the 42-year-old’s compensation increased to INR 4 Cr including payments or lease, rent and accommodation. On a prorated basis, he drew INR 3.4 Cr in FY 2021, from the adjusted date of November 2020. In FY2020, he took home INR 3 Cr along with allowances and other bonuses, which included accommodation, vehicles, fuel expenses, travel expenses and more, the filing shows. The same perquisites have been mentioned in the FY21 compensation.

In the period preceding the salary adjustment, Paytm had seen losses fall, which could be part of the reason for the increase in salary. It remains to be seen whether In FY20, Paytm saw its loss fell by 28%, from INR 3,954 Cr to INR 2,833 Cr, as the company managed to reduce its expenses by 19% from INR 7,254 Cr to INR 5,861 Cr. Paytm recorded 1.2 Bn monthly transactions in February 2021 across its unified payments interface (UPI), wallet, cards and net-banking payment methods.

If we look at salary trends of the startup CEOs in India, their compensation varies in the range INR 2 Cr – INR 4 Cr with some exceptions. Over half of the total compensation for CEOs in India, today is linked with their business performance, in line with the companies in the US and Europe. Performance shares and restricted stock options are becoming more widespread, as more companies are moving away from basic stock options.

How Much Are Indian Startup CEOs Paid?

As per data from Aon’s Executive Rewards Survey in India, the median CEO compensation in India, excluding long-term incentives range from INR 15 Cr for owner-promoter CEOs to INR 3.63 Cr for Indian private companies.

For example, Dream11 founder and CEO Harsh Jain received a salary hike from INR 1.2 Cr to INR 4 Cr for FY2021, a whopping 3.3X hike compared to the previous year. This raise came after the $255 Mn funding round for the fantasy sports gaming unicorn in September 2020. More recently, in March this year, the Mumbai-based company completed a $400 Mn secondary investment led by TCV, D1 Capital Partners and Falcon Edge.

It must be noted that tech startup CEOs including Paytm’s Sharma, OYO’s Ritesh Agarwal, Swiggy’s Sriharsha Majety and others announced last year they would be giving up their salaries for a few months after the lockdown kicked in.

There are exceptions such as Sachin Bansal-owned Navi Technologies, which paid over INR 5 Cr to its chief financial officer and cofounder Ankit Agarwal in FY19 — one of the highest known remuneration packages among startups. Similarly, Quikr CEO and founder Pranay Chulet earned INR 2.91 Cr in FY18 while the company’s chief operating (COO) officer Atul Tewari earned INR 3.07 Cr for the same period, as per its annual filings.

Other exceptions include Bhupinder Singh, the CEO and founder of lending tech company InCred, who was paid INR 4 Cr excluding benefits for FY2018. InCred recorded a 55X jump in consolidated revenue reaching INR 132.44 Cr in FY18 with a net profit of INR 9.38 Cr. In 2019, the lending platform and NBFC closed a Series A round at $85.89 Mn (INR 600 Cr).

Apart from CEOs, the highest-paid executives in FY20 were the chief operating officers (COO) and chief financial officers (CFO), followed by sales heads and chief human resources officers, highlighted in the Aon report.