The hysteria around India’s short video apps may not be all that hysterical after all. With the likes of Chingari, Mitron, Trell, Roposo, Bolo Indya, Moj, Josh, MX Takatak and half-a-dozen other apps looking to carve out a piece of the rather massive short video pie, the competition to become the next TikTok is well and truly on.

These apps are riding on massive engagement and user base growth in the past few months. But a recent report on Chingari called into question the validity of this growth. With the game boiling down to views and likes as an analogue for engagement, it’s all about numbers, and numbers as we all know don’t always tell the full story.

In a recent article, a blogger detailed how he managed to get over 1 Mn views on Chingari for seemingly nonsensical short videos. Curiously, the number of views and likes for such posts followed a specific pattern and formula, as per his findings. This means the number of likes on a video can be arrived at by knowing the number of views. The formula in question, as per the blogger, is:

Using this, the author was able to estimate the likes for videos on Chingari to a degree of accuracy that it’s hard to believe it is a mere coincidence. The author was able to reverse-engineer the number of likes his previous videos should have got based on the above calculations and it falls within the rounded-up/down number displayed by the Chingari app.

This led the author to believe that all videos uploaded to the platform follow this formula for likes and views, without accounting for any organic views the content might garner if it at all proves engaging.

Responding to the report, Chingari CEO and cofounder Sumit Ghosh told Inc42 in a statement on Sunday (March 20, 2021) evening, “One of our users raised concern about alleged increase in the views and that helped us understand that we had a technical glitch on the app. This was immediately addressed to by our tech team and has now been rectified.”

Ghosh’s statement further added, “We urge you to evaluate the process in a transparent manner by trying the app yourself.” So we did.

While earlier videos uploaded by us (with zero followers) were getting views and likes in thousands, that wasn’t the case after Ghosh’s statement. We uploaded a video on March 21, after the blogger highlighted the issue, and by the next morning, it had over 10K views. But on March 22, after the fix, it didn’t register any new views, while another video added on the same day also failed to get any views.

Speaking to Inc42, the blogger said that no one from Chingari’s team has been in contact with him about the bug and a possible resolution. While Chingari claimed on March 21 that the bug has been fixed, the blogger told us on March 22, that none of the videos he had uploaded for this experiment have had their view and like counts reset. Even now, one can see that the videos used in the experiment have over 200K views each. You can see the videos here and here.

Chingari claims that the bug only affected videos uploaded by new users since March 03, 2021. The issue was identified on March 21 and subsequently fixed, the company added further.

“The root cause analysis for this is still underway, and we would take some more time to accumulate the precise numbers,” Chingari cofounder Aditya Kothari told us.

He added that the system was counting views and likes multiple times, which led to the inflated numbers, though we were not told the extent of the impact or the number of users affected.

While the app has existed since 2018, Chingari only started gaining momentum after the Indian government’s ban on TikTok and other Chinese apps in June 2020. The app currently has more than 10 Mn downloads on the Google Play Store and claims to have about 20 Mn monthly active users overall, including its web app.

Beyond the statement, quoted verbatim above, Chingari said that as a “young and growing” company, it takes user feedback very seriously and looks to solve issues quickly. But the company declined to answer in detail our questions on the extent of this problem. Just how many videos have had their view counts inflated, and if the problem is not just restricted to new users, can anyone trust the metrics that Chingari has been touting in the past few months?

As the blogger, who had highlighted the issue in the first place, told us in subsequent conversations, “It’s NOT about just high views, it’s predictability. Content creation world cannot be this predictable.”

That is indeed as true as it gets for content-centric products. Some content pieces capture the wide imagination, while others are ignored by the most loyal users. The business these days is about identifying what’s resonating and doubling down on that. But as anyone who has been in digital publishing will testify, the view or read count on videos and articles can be easily gamed, especially if one owns the platform.

In fact, one need not even own a content management system to game the views. Blogs and websites published on WordPress and other CMSes are powered by themes which often come with preset view counts for article. Just set a number and each post will automatically have that as the view count, immediately on publishing. One can even have the theme set the view count after a certain duration of publishing to make it seem more genuine.

Likes As Incentives For New Users

For Chingari, the problem of inflated views could directly impact its relationship with brands and businesses that advertise on the platform, while its video commerce business might also see some repercussions. Such a problem was also faced by none other than Facebook, which went through a fake views scandal over videos in 2016.

“We have put in a lot of hard work and effort into building a trusted connection with our brands and businesses. We have initiated and are in the process of clarifying the situation to each one of our partners and stakeholders,” Chingari’s Kothari added.

Crucially, Chingari’s engagement model is built around the number of views and likes a video has garnered, since users are awarded Chingari coins for these. These coins can be converted into cash or can be used for ecommerce purchases too. So naturally, a system which shows users a great number of views immediately would be far more enticing than one which shows slower growth.

The company says it is also looking at setting up a bug bounty programme, which is typically used by tech companies to get users and other developers to identify vulnerabilities. But for now, the damage has been done, as scores of bad reviews have already popped up in relation to the fake views, and it would seem for now Chingari has lost some of its spark.

The fact is that India’s short video apps have built their empire on mass hype and frenzy, where the made-in-India credentials were considered more important than actual content or veracity of the engagement metrics claimed by many of these platforms.

Besides Chingari, the likes of Josh, Mitron, Moj, MX Takatak, Roposo (owned by Glance) have also built massive user bases on TikTok’s ashes. And like Chingari, many of them also have an issue with hard-to-believe numbers for random videos, even when users have zero followers.

We uploaded a video of an empty coffee mug on Chingari, Josh, Mitron, Moj, MX Takatak and  Roposo on March 22, after 3 PM. While Chingari seems to have actually fixed the bug which pertains to new users getting inflated video views, Josh suffers from the problem.

Our video experiment got over 8.5K views on Josh, with 400+ likes and 169 shares on WhatsApp, according to the app, within the first day of being uploaded.

On Moj, with just one video which was captioned ‘abcdef’ and no hashtag, we got seven followers, 30 likes and 480 views in three days. On Mitron, the same video got more than 2K views and 17 likes in the same duration. What was surprising was that only on Chingari, we saw zero views.

We even created a second account on Josh, which has a similar views to likes ratio, and four fans too.

Curiously, the fans on both accounts are different, and none of the eight individual fans had actually posted any content. The names of these fans also seem made up. Google searches for these names did not yield any relevant results. 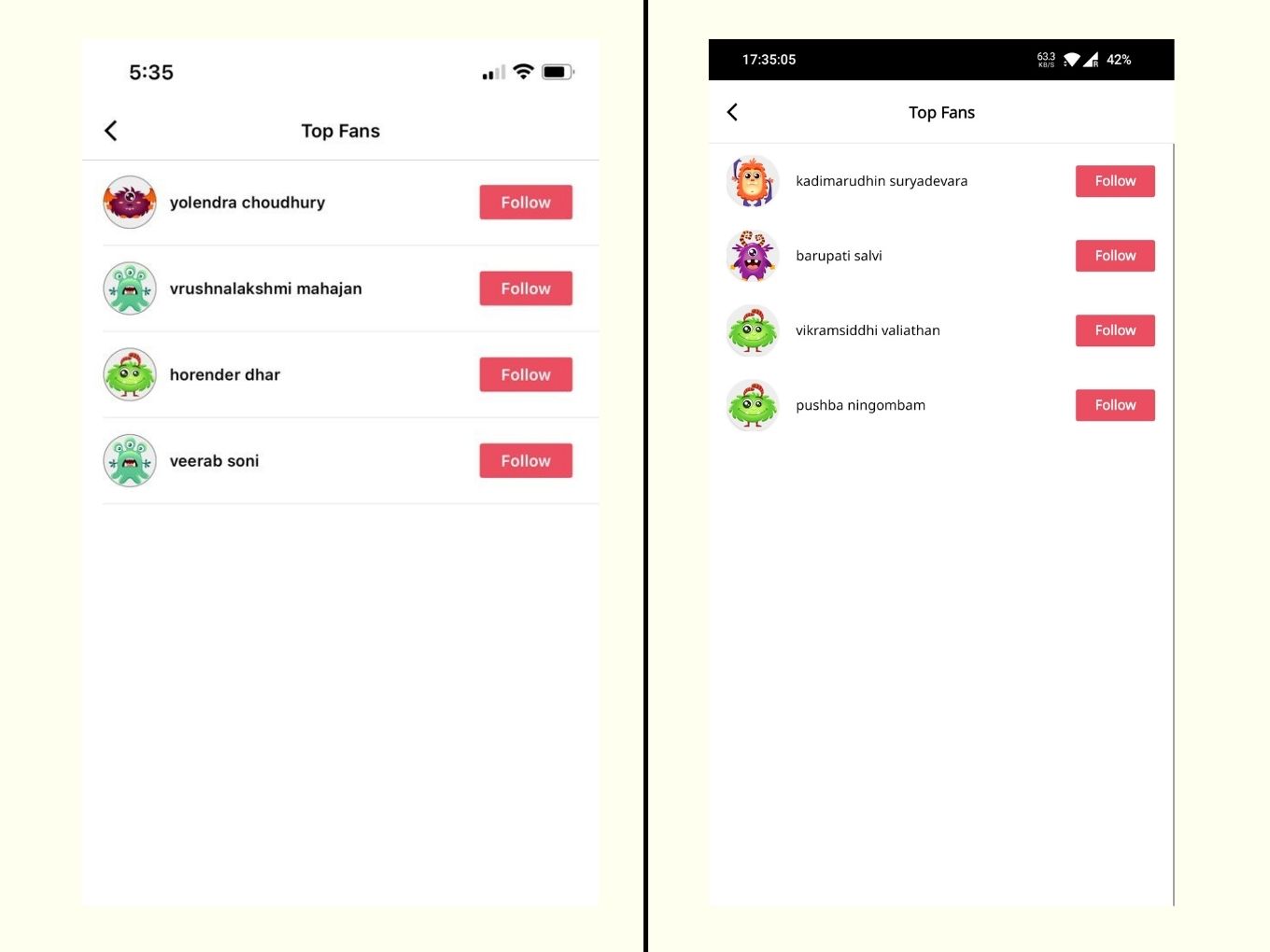 Indeed, how the videos on each of these platforms got even more than a dozen views is a mystery.

That’s because, when a user opens the app for the first time, they are only shown videos that already have tens of thousands of views and likes and posted by those with thousands of followers. So who exactly is watching the videos from users who have zero followers? Like on most other short video apps, one cannot actually see who has watched the videos on Josh or Chingari. This makes it quite difficult to actually trust the views and likes count that these apps show users.

Last month, the government rolled out its new intermediary guidelines, which increase the burden on social media platforms in terms of compliance with government requests in takedowns and content removal. However, the rules do not stress on any transparency in terms of the reporting of data related to the platform. Such rules would make it less likely to see manipulation of likes and views, which are the currency that social media platforms trade in, and which short video apps use to attract investors.