The new frontiers for growth are the next billions, diverse in ethnicity,language and behaviours. The prevalent UX methods need to be recontextualised for them, says Abhinav Chhikara, the founder of 10k designers.

You can’t just take a tier 1 property to tier 3 without redesigning from the other side of the spectrum, notes Sourav Sarkar, head of design, Airtel while emphasising on why T-shirt sizing users doesn’t always work

Recounting his experiences during Covid lockdowns, Rohan Varma, design director at Urban Company observes that If you follow the basics of research,and do right moderation and stay neutral, you can manage to do UX research all by yourself if you are hungry enough 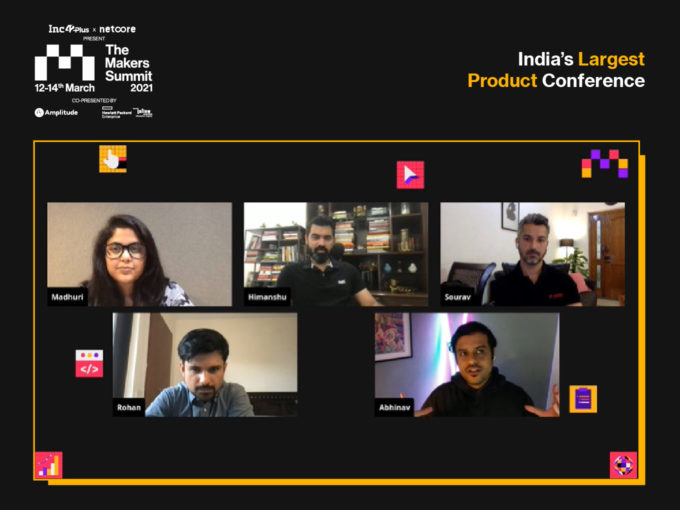 This article is part of Inc42 Plus’ — The Makers Summit India’s largest product conference, supported by Netcore, Amplitude and HPE. Click here to know more.

Our experiences during the lockdown have increased the adoption of digital products and the ‘next billion users’ are learning to interact with technology at a deeper level. WIth this also comes the question —  how do you build for these new users, diverse in their backgrounds and without any step-wise learning to technology growth. That’s what The Makers Summit 2021 panel discussion on “Build for Billions” sought to help us understand.

Maram managed to extract some amazing stories from the panelists to set the right context for listeners and viewers. Here are the key takeaways of the discussion.

Former design head at Unacademy, Abhinav tried to smooth out the initial resistance to map users in their day-to-day for user research. He and his team visited Delhi to understand the day-to-day life of UPSC aspirants, their learning habits and different tools used by them for their learning needs.

Results were promising and they bumped up these efforts from the next time, codenaming these user experiments as Immersion Trips. He says it’s not that the stakeholders are at fault here for resisting UX research early, but it’s important to define the goals and get the teams onboard. Such new experiences get easy buy-ins next time with wider scope and resources.

“The way I think about this is products are designed in the office but are not used there.They are used out in the real world.so for all of us who build products so that’s from a design perspective, product management, development, we need to figure out how can we make the people that are going to use our product are part of the process itself and figuring that out is how I look at inclusivity”.

During the lockdown, people learnt to use Zoom and other such digital solutions for the first time. This led to better opportunities to do UX research for product makers.

In one instance, Rohan Varma, design Director at Urban Company recounted how a user stopped at the roadside to receive a Zoom call and did actual user testing by typing on the Figma prototype. This was the ideal setting to get the prototype tested as the user was in a real environment where the product is actually built to use for.

This definitely validates what Rohan thinks about inclusivity.

“When it comes to statistics, it’s very easy to design for the 99%, but if I show you the faces of the 1% who are excluded that’s what I tell people, whenever you design and think inclusivity, look at the faces of whom you are excluding.”

In another instance, Himanshu, director at Sparklin, recounted how the startup would deliberately ask its users to keep their cameras on during user interviews to show what their day-to-day environment looked like. This gave the team a gold mine view of the real environments in which users put these products to use. He says it helps connect the dots and understand their environment pretty quickly.

Key Takeaways From This Segment

Abhinav Chhikara, founder of 10kdesigners, once asked his design masterclass students to research how their parents and relatives use WhatsApp as an assignment. Students scoffed and said that they can figure it out in just 30 minutes, only later to realise their use was far from the usual notions of a Tier 1 user.

Students noted that their mothers didn’t know how they were added to the group but used the group as a feed to see what products were added. Fathers at homes used the platform more like Slack, having different groups for different teams and having their own version of product stand-ups by reporting what was happening on the factory floor.

Even though some of the ‘next billion users’ haven’t had an exposure to objects that are extended in the form of icons, users interpret them in their own ways and still understand what that icon is there for.

Himanshu gives an example of the search icon to understand this insight better. How many of them would have used magnifying glass in the first place to relate it to the search icon?

How to upskill the government teachers in Tier 3 government schools —  this was the design brief that Himanshu Khanna and his team got while working with a social edtech startup. What they experienced was something they never thought of. It was overwhelming, says Himanshu who had no real idea of how government schools were in such small cities.

On closely observing the teachers in the real environment they would realise that teachers didn’t have a sense of community, their families weren’t appreciative of their work and students didn’t value them. Despite this disparity, the team would later start probing for moments for joy in the teacher’s lives. Teachers used an on demand mobile entertainment service — Kan Khajura Tesan which played songs on just a missed call.

Later, Himanshu and his team at Sparklin would change the play button to a call button for the social edtech app that they were developing for the project. This minor tweak to the representation of the icon resulted in 980X growth in engagement

The play button didn’t exist in their lives as they had no real life objects around them that mimicked the play button like a VCR. Instead of figuring out what the app did by tapping on different icons, the call button brought in the sense of familiarity for these teachers.

The solution came through depicting a virtual card on-screen where all details such as CVV, expiry date and the card number can be added. This increased the usage of the credit card or debit cards, he recalled.

Sourav Sarkar, head of design at Airtel, took us through the granularities of user segmentation and how it helped the telco. He weighed in on the confirmation biases usually people have and how they live in their own echo chambers. He says one needs to take their own point of view as hypotheses and validate them with experiments.

For example, Tier 3 users now have avenues to buy products that they aspire for and can afford. Increasingly, there are more Tier 3 users now on the ecommerce platform than Tier 1, adds Himanshu, Most of these users are curious and have time at their hands to explore the products. They don’t have the means to restaurants and other entertainment avenues that a Tier 1 user has, so they use the app as recreation.

Entrepreneurs need to start looking at their product designs beyond the lens of the Ttier 1 market. A good icon, white space and making the UI clean only won’t cut it while building for the next billion.  “This whole concept of tier 3 being a pretty sad and morose kind of you know imaginary piece in our head is not really true in more sense of it.” added Himanshu.

While adding on what inclusivity means for him, Sourav said “I believe inclusivity is not just about designing for everyone but knowing who you are designing for and consciously calling out.Then design for the rest of the pieces and do it in the targeted manner.”

He also cited an example from Airtel Super Hero Program which was designed to deal with the pandemic to give us more glimpses of how segmentation works there. He showed how Airtel picked up the key parameters to break, divide and conquer the various user segments. These parameters were whether users were online, did they make online transactions and if they were on their own network. Based on these the different user cohorts were identified and the framework to improve their experiences was made.

Customers who ticked all the boxes for all the parameters were then inspired to recharge for others as Airtel Super Heroes.

“Sophistication doesn’t have to come at the expense of the opportunity cost for the other segment,” Sourav added.